Alex Gross on the 1960s Youthquake

From 1965 until 1971, this underground newspaper struck fear into the hearts of millions of Americans. But countless other Americans welcomed it as a glorious ray of hope and joy. 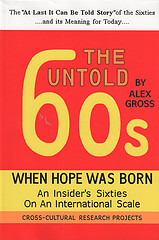 Essentially the flagship of the Sixties, EVO influenced many other so-called underground newspapers in this country and around the world. While resistance to the Vietnam War was often featured, it was scarcely the only theme. Nor was EVO only about sex, drugs, and rock ‘n’ roll, though these were certainly present.

I wrote for EVO from 1968 to 1971 and before that helped out with other underground newspapers in London, Amsterdam, and Berlin. So let me confirm that other EVO topics included feminism, eastern mysticism, the commune movement, new approaches to education, practical problems of artists, the budding ecology/environmental movement, and the struggle for black and Hispanic equality.

You might also find the odd plug for classical Marxism, though contrary to today’s right-wingers this topic never played a major role. True, our movement was called the “New Left” (among many other labels), but our “left” was always more cultural than political.

Humor played a central role from the beginning, and in some ways EVO ranks as a continuation of that great American tradition mixing humor and skepticism pioneered by Mark Twain, Ambrose Bierce — both also journalists — and H.L. Mencken at his best. EVO’s humor was both verbal and visual, introducing millions of Americans to the art of R. Crumb, Art Spiegelman, Kim Deitch, Gilbert Shelton, and others.

Of course sex was important, and sex meant all varieties: straight, kinky, and gay, not to mention major sex-related practices like birth control and abortion. Drugs embraced both soft and hard varieties, with a slight bias towards the former.

Wars can bring about major social changes, and there was room for all of these issues and more on the broad coattails of the anti-war movement.

Which brings us essentially to the world we know today, where all of these Sixties causes have either taken over or have greatly altered our outlook. Except in the red states of course, where a Fifties mentality still aims at the abolition of all Sixties values.

It was called a “youthquake” at the time, a seismic jolt that can suddenly occur when the rules we think we live by are gravely subducted by the rules we actually live by, causing profound social eruptions to suddenly break out in powerful upheavals all around us.

Could such a youthquake, such a mind-jolt, happen again? The answer is simple: it has clearly already begun. In 1965, remarkably few Americans thought any of the Sixties issues could ever reach the surface, much less take over.

As a Sixties survivor I believe we are now living in our own version of 1965 and that equally major social changes may soon be bursting forth on all sides.

During the Sixties one of the few places you could write about such offbeat topics was the East Village Other.