EVO, the FBI and the Plot to Bomb the Pentagon

I can’t honestly remember how I became interested in The East Village Other. Probably, it’s just the age-old thing of a son wanting to know more about his father. That my father’s twin brother was also part of that scene (more involved as it turns out), made it even more curious. The more I researched the whole thing, the more I became aware of what an important part of history they had been. 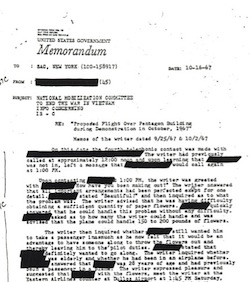 I suppose it’s not every kid who would make a Freedom of Information Act request to learn everything he could about something, but that was the historian in me back in 1989 when I was writing my undergraduate thesis at the University of Colorado at Boulder. There were lots of stories about possible surveillance and possible this and that. I wanted to know for sure.

The documents came back from the FBI and many of them were typical FBI documents – not all that interesting and with lots of stuff blacked out. However, there were also many surprises, many little semantic treasures, and many things revealed that one might think shouldn’t be. The following account was culled from the most interesting of those documents.

In September 1967, The East Village Other hatched a plan to bomb the Pentagon. The planned date of this bombing was Oct. 20, 1967 (though it was changed to Oct. 21 at some point or the FBI got the date wrong in its original memorandum), the day before the National Mobilization Committee to End the War in Vietnam was to hold its march on Washington. On page 22 of EVO’s September 1-15 issue was a not-so-subtle ad: “Pilot Wanted for Daring Feat, phone 228-8640, ask for ALLEN or WALTER.” Allen was my uncle, Allen Katzman and Walter was Walter Bowart . The plan was true and the FBI took immediate notice, only the bomb wasn’t nuclear or conventional. It was flowers.

EVO had been on the FBI’s radar since April 8, 1966 when J. Edgar Hoover received a memorandum from SAC, New York, concerning the ninth issue of the paper. That issue recreated an FBI wanted flier featuring Dr. Timothy Leary, Ralph Ginzburg and Allen Ginsberg . Hoover responded in a memorandum back to New York on April 14, 1966, characterizing EVO as “typical of beatnik literature” containing “numerous obscenities and off-color remarks.” At Hoover’s direction, the New York office contacted my uncle to inform him that EVO was violating Public Law 670 and that he had no authority to reproduce an official document of the FBI. 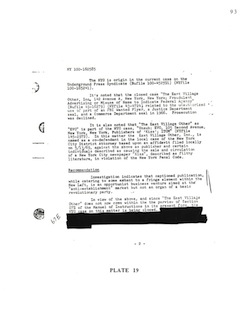 Over the course of EVO’s existence, the New York office forwarded issues to Hoover, most of which were labeled “obscene.” Concerned citizens also sent several issues along to the FBI with personal letters. On Dec. 1, 1966, one such person wrote: “I have the deepest faith in you and know that you will take whatever action is possible to stop this degradation of our children.” Another pleaded in a letter dated Dec. 6, 1967, “Isn’t there any way to prevent the publication of such filth? I hope so . . . “

Hoover wrote back sympathetically but acknowledged the inability to do much about it. The FBI also received a panicked message from the Federal Power Commission in 1970 when EVO encouraged New Yorkers to turn on all the appliances in their houses to blow out the northeast power grid. There was little the FBI could do and nothing came of EVO’s idea anyway.

When it came to bombing the Pentagon with flowers though, the FBI went into full counterintelligence mode. The New York office informed Hoover of EVO’s plan and began counterintelligence to convince EVO’s organizers they had a compliant pilot until it was too late for them to get somebody actually willing to do the job. Two plans were proposed, one involving only phone calls and the other, a personal meeting. Ultimately, the FBI decided to avoid any personal meetings if at all possible so there was no chance EVO would discover the pilot was an agent and generate unfavorable publicity for the Bureau. 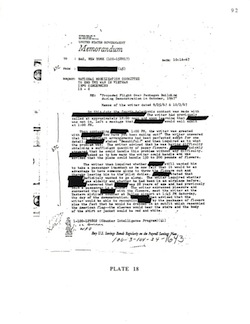 Surprisingly, EVO’s plan didn’t violate any laws at that time, a fact that the New York office noted in an FBI airtel to Hoover dated October 3, 1967. The air space over the Pentagon was not restricted and so the only regulation that might have been violated concerned the dropping of any article from an airplane that could endanger life. However, the New York office was astute enough to note that “if the flowers were not dropped in one bunch, this regulation would probably not apply.”

An agent using the name of Walt Jackson called the offices of The East Village Other five times between the dates of Sept. 15 and Oct. 20 of 1967. The first call involved an exchange with EVO’s receptionist who informed the agent that he would not be paid and that he needed to furnish his own plane. He was told he could call back on Sept. 19 when Allen Katzman would be available. In order to gain my uncle’s trust during a second call, the agent indicated he could not fly anywhere on Oct. 21 because he was going to be in Washington, D.C. for “big doings” involving a movement for peace. This was apparently all that the editor needed to hear and he immediately gave the agent all the information about the plan. When the agent told my uncle that D.C. was full of restricted flying areas, he exclaimed, “But can’t you just see the headlines?”

Walter Bowart handled the third call, insisting that a staff member accompany “Walt” on the flight. Ultimately, the two Walts agreed that anybody able to connect “Walt” with the flight probably wasn’t a good idea. During the fourth call, “Walt” and Walter finalized the logistics of getting the flowers and ascertaining what they would weigh (150 to 200 pounds). A meeting was arranged for Oct. 21 at the Eastern Airlines counter of Dulles Airport at 1:45 p.m. The agent made a fifth and final call and spoke to the receptionist who gave him details of the flower delivery. Specific mention is made in the agent’s memorandum of Oct. 20, 1967 to SAC New York about the woman’s enthusiasm over the completed arrangements. She “terminated the conversation by saying ‘Groovy!’” The [agent] then answered, ‘Groovy!’” 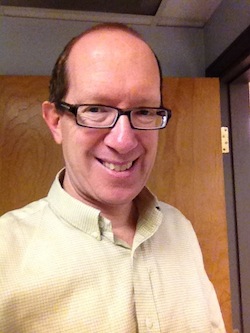 Obviously, the flower bombing was not to be. On Oct. 21, the FBI sent two agents to Dulles airport to conduct an investigation of the people who showed up to meet the pilot. Walter Bowart’s attire merited special attention in the agent’s report to Hoover dated Oct. 23, 1967:

…a blue coat with white stars resembling the blue field in the American flag. He also wore a black, wide brimmed uncreased hat, faded blue bell bottom dungarees, and black cowboy boots. He had a heavy mustache and no beard, long heavy side burns and his hair was tied in a small bun in the back. [Walter’s] dress reflected no apparent desecration of the American flag.

The “hippies” who showed up at the airport split up to search for the missing pilot. The observing agents, who were posing as photographers, asked to take pictures. The group became increasingly agitated over the two and a half hours they waited for the pilot. Eventually, they gave up. Recognizing that the photographers were probably not photographers, one member of the group took two flowers and handed them over, telling the agents in a “sarcastic” voice, “That’s for being so nice.” The EVO staffers then left and made their way to Washington, D.C. for the march. The FBI report dated Oct. 23, 1967 ends: “It is further noted that a police observer overheard some people in the crowd at the Pentagon on 10/21/87 voice the question as to when the plane was going to drop the flowers on the Pentagon.”

FBI mission accomplished. Without the FBI’s surveillance and effort, The East Village Other might have succeeded in dropping a planeload of flowers on the Pentagon. Embarrassment was prevented, proving that a bunch of hippies, beatniks, and bohemians couldn’t pull off such a stunt if the government meant to keep it from happening. And certainly, taxpayer money was saved – crews never had to sweep up two hundred pounds of paper flowers that might have covered the Pentagon building and grounds. While EVO celebrated many achievements and acts of subterfuge on its own pages, this battle was clearly won by the FBI.

Jason Katzman is the son of EVO’s accountant, the late Donald Katzman, and the nephew of the late Allen Katzman, one of EVO’s founders, who, with his 10-year-old daughter, was tragically killed in a collision in 1985. Jason Katzman is self-publishing his thesis, “The Rise and Decline of The East Village Other: October 1965 – November 1968” as smaller articles here , here , and here .