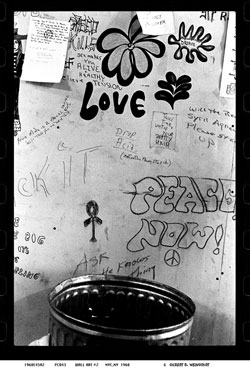 Yesterday, Peter Leggieri looked back on his time as an editor-owner of The East Village Other. Today he recalls his departure, and rebuts an earlier piece written by co-founder Dan Rattiner. In that piece, Mr. Rattiner remembered being told by EVO’s publisher, Joel Fabrikant, that the Mafia was behind secret, unauthorized print runs of EVO. He also described abandoning a takeover attempt with co-founder Walter Bowart after they were warned by a lawyer that the company had never paid its withholding tax. Here’s what Mr. Leggieri has to say about all that.

Dan Rattiner’s reminiscence “EVO, the Mafia, and the Takeover That Wasn’t” has so many factual errors and omissions that it should be labeled semi-fiction.

He said stock ownership in EVO began with Walter Bowart, Allen Katzman, and himself each holding three shares which cost $200 per share. He then described a strange “auction” in which he bid $200 and received a fourth share, and John Wilcock bid $100, a sum that should have purchased half a share. The truth is that Wilcock held twelve shares. I should know: I bought them from him when he left EVO in 1966.

Rattiner gave a melodramatic version of the “Takeover That Wasn’t.” Walter Bowart was always the majority holder of EVO stock. He did not need anyone else’s stock in making a corporate decision. However, there is a backstory to Bowart’s presence in New York at the time described by Rattiner.

When I was about to leave EVO in 1969, I called Bowart and explained to him that I was exhausted and burned out after working more than three years with little sleep and no rest. But most of all, I was completely disillusioned with the “Movement” because its leaders, in my eyes, were more interested in personal fame and fortune than with meaningful and achievable change. It was a time when rhetoric trumped reason; and the rhetoric was sounding more and more like slogans from the 19th century. In addition, I explained that, as evidenced by Woodstock, the “underground” EVO had achieved its goals of altering the public discourse on politics, religion, sex, art and lifestyle. 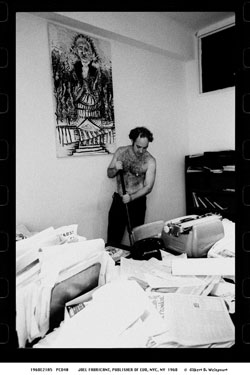 Bowart asked me for a report on EVO’s status and recommendations for the paper’s future. During the preparation of that report, I discovered that Joel Fabrikant was “cooking the books” by doctoring circulation figures and misreporting income and expenses. This was an especially hard blow for me because I had brought Fabrikant to EVO. He had been my roommate in school and my friend. He had violated a position of extreme trust. I called a staff meeting and told everyone the facts surrounding Fabrikant’s actions and announced that I was leaving in disgust.

Prior to the staff meeting, I told Bowart of my discoveries. He came to New York, but not for the supposed “takeover” – he made the trip in order to implore me to join him in his new publication called Omen, a project that already consumed his full attention. The fact that Don Katzman, the paper’s longtime treasurer and accountant, had not been brought to the “takeover” is an indication of the meeting’s lack of seriousness.

Rattiner retold the totally discredited story that the “Mafia” was somehow involved in EVO’s decline. The story of the second press run was a Fabrikant fabrication intended to deflect attention away from his calculated misdeeds. Rattiner may not have known that since 1967, I had an art director monitor every press run. The art director’s responsibilities included collecting the original paste-up pages and the large film negatives used to make the printing plates that were actually on the presses. At the end of the press run, he would remove the printing plates and destroy them. EVO was fully protected against any unauthorized second press run.

To respond to Terry, I had to lean through the passenger window, right over Dylan’s lap. I realized that the situation discomfited Dylan but I took no notice and explained to Terry that he’d get his money on the next day as promised. As I pulled my head from the window, I nodded to Terry’s squirming passenger and Terry drove off.

What’s more, no printer or distributor ever voiced an objection to our practice. Rattiner quoted Fabrikant as saying the distributors did not return unsold copies of the paper to us. The truth is that EVO always received such “returns” – I once transported a truckload of them to the Woodstock Festival. Incredibly, Fabrikant implied that he had no say in determining the quantity of a press run because “each week we would get the same printing bill from our printer.” If the “Mafia” had been involved and had in fact been able to have two print runs, they probably would have made EVO pay for both.

Despite Fabrikant’s supposed allegations regarding the distributor, Walter Bowart wanted the same company to distribute his new magazine, Omen. In a letter I received from Bowart in March 1970 he told me that the bookstore owners he contacted in Arizona said that EVO’s distributor was the best, and he asked me to contact them on his behalf.

Finally, Rattiner said that Fabrikant told him that EVO had not paid its taxes in its first two years. I was never aware of a tax problem. I believe that Don Katzman, EVO’s treasurer and accountant, would have told us about such a problem. Don’t you think that all of the authorities trying to shut EVO down would have noticed such a glaring breach of the law? Rattiner wrote that Peggy Hitchcock’s lawyer warned him and Bowart they could go to jail over the unpaid taxes. So what did they do? They simply left and did nothing about them. They were never arrested, and they were never sued by the IRS because there was never a tax problem in the first place. Fabrikant’s story was fiction.

Sadly, Rattiner’s tract missed the real story of The Other’s last days. It was there where Rattiner saw it, written on the bathroom wall in the form of graffiti: “MILLIONAIRE PIGS GO HOME. EVO IS OURS.” For in the end EVO belonged to its staff, given to them as a gift from its owners. What they did with the gift is a matter of history that may still someday be told.