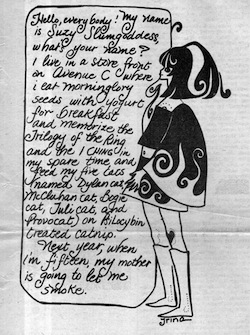 It was autumn, 1966. I had come to New York from Los Angeles only months before. My then-boyfriend and I took acid and went walking through the streets of the Lower East Side – a bad idea. As the acid took hold, everything started to look weird, and not in a good way. It was a case of “people are strange when you’re a stranger,” even though the song had not come out yet. Faces came out of the rain and they looked ugly. In short, it was a bad scene, man, and we were freaked out.

And suddenly I saw that we had come to the EVO offices, in their storefront on Avenue A, across from Tompkins Square Park. Sanctuary! We rushed in and caught our breath. The office was empty except for Allen Katzman, the EVO publisher. A potbellied stove was providing warmth. I gratefully explained to Allen that the streets of the Lower East Side had become a bad trip.

As we sank into a worn sofa, Allen stood in front of the potbellied stove and talked us down. To make us feel better, he told us about the time he had been a guest speaker at a women’s college, stoned out of his mind on acid: “See, I too get unsettling experiences on acid.”

And then something wonderful happened. As he calmed us down, Allen turned into a rabbi! It wasn’t too hard for him, because he was already Jewish and bearded, but his beard grew and got darker and he became the kind of rabbi you see in Woody Allen movies, yarmulke and all. Then as Allen continued to talk, he would slowly morph back into Allen Katzman, and then after a short while, he’d become that rabbi again.

My boyfriend didn’t see the same thing – no rabbi for him. I guess you had to be Jewish.

A couple of days later, I drew a kind of proto-comic as a way to express my gratitude.

It wasn’t a full-blown comic with panels, but a single panel drawing of a character I created – a teeny-bopper hippie named Suzy Slumgoddess, along with a speech balloon. The EVO storefront was closed so I shoved it under the door. They printed it in their next issue.

And thus began my career.