Jaakov Kohn, the Publisher, and the Pie 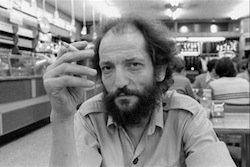 Here, Ray Schultz, an East Village Other contributor, remembers editor Jaakov Kohn, as well as a famous incident involving R. Crumb and EVO publisher Joel Fabrikant. Though the publisher’s name often appears as Fabricant, we’re told by his onetime roommate Peter Leggieri, among others, that it was Fabrikant. Likewise, Jason Katzman, nephew of EVO editor Allen Katzman, confirms that the Ginsbergian spelling of his uncle’s given name, which also appears in the editor’s book proposal, is correct. We have seen it, even on EVO mastheads, as Alan or Allan, too. Anyway, as Charlie Frick pointed out, things like grammar and punctuation were quite fluid in those days. Mr. Schultz put it this way in an e-mail: “I wouldn’t trust my spelling from 1970, or anyone else’s.” And now, over to him.

Maybe it wasn’t the same as Gertrude Stein telling Hemingway, “You are a lost generation.” But the defining moment of the 1960s for me came when Jaakov Kohn said, “Think of The East Village Other as your Jewish mother.”

Boy, did I need to hear that. I was penniless and had bronchitis when I ran into him that snowy morning. He bought me a coffee, then suggested a cold treatment: “Buy a nickel-bag of heroin, divide it into six lines, snort two lines and go to sleep. Wake up, snort two more and go back to sleep. Then get up and snort the last two.”

Later, when we hit the office, I finished off the food left over from a photo shoot: fried chicken carved into genitalia.

Thus did EVO nurture “talent that other publications could not absorb,” as Jaakov Kohn put it.

And I was awed to be there. Founded in 1965 as the “newspaper of patarealism,” EVO was one of the best underground papers in the country, but it was different from most, run not by New Left types, but by old Beatniks like Jaakov Kohn.

The history was there on the walls. There was the cover featuring the newly deceased Francis Cardinal Spellman (“Congratulations on your promotion, Cardinal Spellman, and Merry Christmas Wherever You Are”) and another showing Toulouse-Lautrec with an unpublishable word followed by “Hate” on his easel.

A sallow man with poor motor function, Mr. Kohn arrived in the United States in 1950 after serving in the Israeli underground. How often I heard the story of his first day in New York: “I went into Temple Emanu-El, and they told me, ‘Sir, please off take your hat.’ That’s when I decided to become an Episcopalian.”

Later, he ran a jewelry store on MacDougal Street in Greenwich Village, and enjoyed taking the measure of his visitors: “Jack Kerouac was a mama’s boy,” he’d say. “Bob Dylan was a punk — I threw him out of my jewelry shop.”

What kind of editor was Jaakov Kohn? Not much of one. If he liked you, he’d hold your copy up as if it were a precious metal. The chosen included Lil Picard, the 70-year-old artist and critic (“I did my loving a long time and it kept me alive and above water”); Dean Latimer (whose all-time classic was about blowing up frogs with bicycle pumps) and Vincent Titus, the poet and ex-Jesuit who had spent 15 years in the Rockland state mental hospital.

He also reveled in the work of cartoonist R. Crumb. On one of his rare visits to New York, Crumb submitted a comic titled “Pud,” about an overweight kid with a beany. “Now look here baby,” he tells a female playmate, “you got such big fine legs, ain’t you got nothin’ better t’do than always be snappin’ that bubble gum?” Noticing that Pud had adult stubble on his legs, Mr. Kohn said, “Crumb, you’ve got a follicular hang-up.”

The other power in the office was Joel Fabrikant, the tough-guy publisher. When he caught me reading the Wall Street Journal, he said, “You read the Journal?”, and raised my salary from $20 to $50 a week. But it didn’t last long.

With business tanking, Joel called a staff meeting to demand editorial control, and for his trouble, got hit in the face with a whipped-cream pie by R. Crumb. (Of all the drivel I wrote for EVO, my account of this episode is the only piece that ever gets quoted). [Download PDF of Original Article.]

Soon we were facing what Latimer called “creeping corporate necrosis.” Fabrikant left with Kiss, his pornographic cash cow, and we got evicted from our rent-free quarters in the Fillmore East.

Blame it on drugs or on the end of the ‘60s. Latimer summed it up: “Once I was young and handsome — bright, too. And now? A toothless, pock-marked wretch.”

In November 1971, having abandoned ship like all the others, I visited Jaakov Kohn in the dark EVO office. (The lights had been turned off for nonpayment). “We have learned to subsist on the bare minimum,” he said. “But we are ideologically and financially independent.”

He had spirit all right, and he remained a contrarian to the end. “I’m sick of hearing about the Bengalis,” he said about the clamor over Bangladesh. “What about the Biharis?”

Ah, dear Jaakov. EVO folded a month or two later. But Jaakov Kohn came back — as editor of the Soho Weekly News.