by The Local East Village

In its early issues, The East Village Other began featuring a “Slum Goddess,” a title that was taken from a Fugs song :

When I see her coming down the street,
I’m as happy as I can be,
My beautiful Slum Goddess from Avenue D.

Among the first to be featured was Suze Rotolo, the artist who had been Bob Dylan’s girlfriend. In her memoir, “Freewheelin’ Time: A Memoir of Greenwich Village in the Sixties,” Ms. Rotolo, who died a year ago, of cancer at age 67, tells of the time Walter Bredel photographed her for the feature.

A few weeks later a reporter from the East Village Other, a new local biweekly claiming to be hipper than the Village Voice, asked me to be part of a feature the paper was starting up called “Slum Goddess,” inspired by a song by the Fugs, “Slum Goddess of the Lower East Side.” The feature would be the counterculture’s answer to the Miss America aesthetic of overly made-up and girdled women with beehive hairdos. I thought it was a fine idea and said yes. I was to be the Slum Goddess for December 1965. 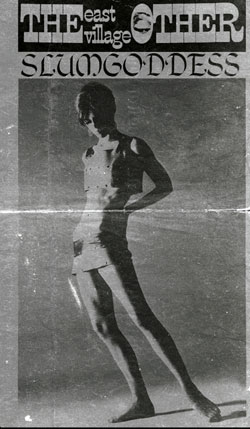 The reporter asked me three questions: what I did, why I lived on the Lower East Side, and what I wanted from a man. Walter Bredel was the photographer and we walked around the East Village one afternoon while he took pictures. I wrote that I lived in the East Village because I liked the view – I was being sarcastic, since the neighborhood was really grungy. But when the paper came out, the quote was transformed to I liked the “new.”

The feature gradually became very popular and got coverage in the mainstream press. An article in an April 1966 issue of the Herald Tribune, titled, “Miss America, Move Over,” reported, “They are fully dressed. They all have undone hair, most of it long, and little make-up. And when they say ‘beautiful,’ they don’t mean anything to do with cosmetics or external fixing up. It’s living or soul they are talking about.”

Feeling a little more stable around the time of my twenty-second birthday, in November 1965, I began looking for an apartment; and it didn’t take too long to find one with an affordable rent. I moved into another fifth-floor walk-up, this time on West Tenth Street between Bleecker and West Fourth Streets. By the time I was an East Village Other Slum Goddess in print, I no longer qualified in real life, since I had moved back into Village Voice territory.

Other Slum Goddesses included Coca Crystal, who we’ll hear from later today, and Edie Sedgwick. The latter was recruited by Bob Simmons, an uptown EVO groupie who occasionally also covered stories (Mr. Simmons now lives in Austin and produces a lot of videos. We’ll hear more about his EVO days next weekend). Below, in a comment that originally appeared on Texas Ghetto , he describes how he managed to convince Warhol’s “it” girl to pose.

So I will have to regale you sometime about the ‘wild night’ I spent with Neuwirth and Edie in NYC as they rolled with bumpkin me along from club to club fighting and snorting crystal all evening. I was the designated driver before there was such a concept, but I did, stupidly, maintain a car when living in the city, so…

I do remember at 5 a.m. in some dive like the Kettle of Fish after a particularly bitter exchange between the two, Edie jumped up and started to stalk out without Bobby. He yelled after her at the top of his lungs for the 20 or 30 other night crawlers to hear, “Go on, leave! Fifty dollars is way too much for a cheap bitch like you.” She kept walking without looking back.

I later called her up and got her to be our “SlumGoddess” in an edition of The East Village Other. Walter Bredel took the pics, and we posed her next to a TUMS poster in the subway. When we printed the neg, we printed it backwards…SMUT.