Allen Katzman and J.C. Suares on the Reportage of Wonderment 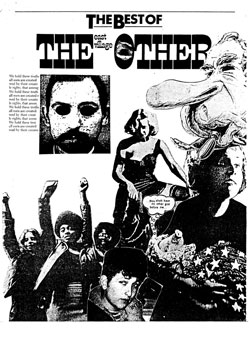 With this special edition, The Local presents the first of seven wild, winding, weekend walks through the seven years when this neighborhood was home to The East Village Other. EVO, as the weekly soon became known, began in the imagination of the late Walter Bowart , in his fourth-floor painter’s loft at Avenue B and Second Street. He was the sole creator of Issue No. 1, a broadside, or uncut proof sheet, that was folded into tabloid size. As readers unfolded it again, the pages faced all directions. Anyone with half an eye who happened to pass a Village newsstand that October of 1965, could see that Mr. Bowart was far ahead of others in grasping the real potential of the revolution in printing techniques just getting underway: the move from costly metal plates, professional printers, and “hot type” to paper, scissors and rubber cement. Cold type — offset printing — did more than lower the bar to entry; it provided whole new means of expression in graphics and text.

By Issue No. 2, the East Village Other had a team of publishers and actual papers of incorporation. By Issue No. 3, it had its own storefront office on Avenue A between Ninth and Tenth Streets, just across from Tompkins Square Park. In 1968, Bill Graham bartered concert ads for office space on the third floor of his new Fillmore East , giving EVO daily access to the concert hall’s all-important back stairwell and the stars of rock ‘n’ roll.

By the time the Fillmore closed in 1971, EVO’s end was not far behind. It had moved to new offices on the 11th floor of 20 East 12th Street, and then to a back store room of the Law Commune offices at 640 Broadway. There, as word surfaced that, owing to unpaid bills, city marshals were coming to seize whatever assets might be, the young Charlie Frick , alone in the office with Coca Crystal , scooped up all and sundry, boxed up the files, commandeered his family truck and then hauled it all to his mother’s barn in Passaic County, N.J. There it would remain unmolested for the next few decades.

In anticipation of The Local’s exhibition “Blowing Minds: The East Village Other, the Rise of Underground Comix and the Alternative Press, 1965-72,” we asked Mr. Frick to dive back into the bounty, now variously housed in a storage unit and at his home in Montclair, N.J. Choice selections from the ephemera and artifacts he and others have unearthed will be among items to be featured.

The Local has something from the annals, too. The items in Mr. Frick’s collection included the following undated typescript that must have come into his possession at some point at least a decade after EVO’s demise. It is a xerox of a proposal for a book to be titled “The Best of the East Village Other.” Its cover page attributes it to the late Allen Katzman (most likely the proposal’s author) and the well-known creative consultant and book and magazine designer, J.C. Suares . The late Mr. Katzman, a poet and longtime publisher of EVO, was, along with Mr. Bowart and  Dan Rattiner , a signatory to the founding papers. Who better than he to start us out?

“The Best of the East Village Other” Proposal