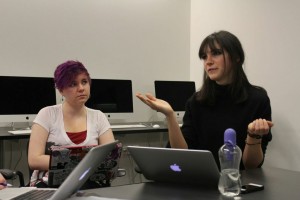 NYT Labs, founded in 2006, is the research and development arm of the New York Times. The idea is to reach “beyond the next product cycle, identifying trends and technologies that will emerge in the next three to five years.”

Neither a product development group nor a think tank, the Lab creates things that follow from the trends it is tracking. “We develop applications and prototypes that imagine the impacts these changes will create, and we share those prototypes to facilitate innovation and thoughtful consideration of the future of media.”

In a breakdown of some of the trends it tracked in 2014, the Labs identified as key areas: connected objects and environments, self-driving vehicles, wearables, drones, crypto-currencies, and biotech & human augmentation.