There Is Always The Other

Rex Weiner co-founded The East Village Other’s successor,the pioneering New York Ace (1972–73) and according to his FBI file, was a founding staff member of High Times . He recalls getting his start at EVO.

My first week aboard The East Village Other, its venerable editor-in chief Jaakov Kohn squinted at the name I’d signed to an article, clutched his blue pencil spasmodically, and curled his whiskered lips in disdain. In an Eastern European accent nearly as impenetrable as the cloud of unfiltered Lucky Strike smoke curling from the butt in his nicotine-stained fingers, he declared, “You look more like a Rex to me!”

The newly minted moniker echoed amongst my new colleagues in the vast, shadowy loft. At EVO you had the name you were born with and the name that EVO gave you: Jackie Diamond was Coca Crystal , Alan Shenker was Yossarian , Jackie Friedrich was Roxy Bijou, Jaakov was “The Arab,” Charlie Frick was Zod, and so on. And so with my next byline I was reborn in 1970, a new decade with a new name, and on my way as a writer, of sorts.

I’d walked out of the clanking elevator into the EVO office that fall, a 20-year-old N.Y.U. dropout from upstate and a Lower East Side inhabitant since I was 17. Two of my closest friends from high school were lost, one to Vietnam and the other to heroin, allowing me to nurse a tragic heart tinged with righteous political outrage. With half a dozen porn novels credited to my name — or pseudonym — for a Mafia publisher, and a handful of poems I’d recited at St. Marks in the Bowery, I thought of myself as an established writer. I appointed myself EVO theater critic, filling a staff vacancy, and felt right at home.

The stuff I wrote for EVO was crap then and reads even worse now. I’d fashioned myself a sort of Addison DeWitt first-nighter in blue jeans with a Stalinist bent; the revolution came first and nothing I saw onstage was radical enough for me, short of an actual execution, although some off-off-Broadway productions came awfully close. Reading my clips today, however painfully, it seems I was having a good time — probably because tickets were free, theaters warm, and it was cold outside.

In fact, I had nowhere else to go. I found myself at one point sleeping in the “stacks,” back issues of EVO piled helter-skelter in the rear of the loft office, along with likewise homeless staffers Dean Latimer and Ray Schultz and God-knows-who-else burrowed into the newsprint. In the morning, Coca Crystal brought us bagels and coffee and for a time I moved in with her — closer to the food, not to mention a whole lot warmer. 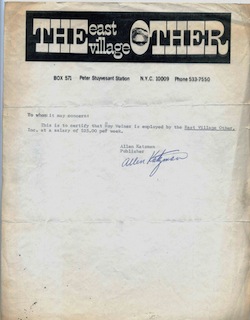 My weekly paychecks, $25, were cashed by Mickey Ruskin at Max’s Kansas City across Union Square, because I had no bank account. But only after I showed Mickey a letter signed by EVO publisher Allen Katzman asserting that I was indeed employed and the checks were good. Which they were — for a while, anyway. EVO was on its last legs and soon I would lead many of the staff onward to create its successor, the New York Ace , as its publisher.

But at that time, some of us pretended to despise Katzman, a poet and founder of EVO, because he was the “money man,” which we knew was unfair because his twin brother Don was the real businessman. Allen was anything but; he was among those too bohemian for Greenwich Village’s traditional bohemia who imbued EVO with its essential spirit and aesthetic. Goaded by LBJ’s endless war in Vietnam, Nixon’s apocalyptic politics and lashings of LSD and pot, EVO’s founders adopted the same fin de siècle pose as the absinthe-soaked Parisian artists and poets of the late 19 th Century.

Poetic roots distinguished EVO from kindred publications of the time — the Berkeley Barb , Los Angeles Free Press , and others, which were founded as political papers, reporting the news that the pre-Bernstein/Woodward mainstream press refused to report. While still delivering anti-war propaganda and occasionally superb original reporting, EVO was more in tune with the San Francisco Oracle in its endorsement of a revolutionary spirituality, which was the real news — a search as American as apple pie for a soulful authenticity transcending politics. “One God, One Country, One Snake,” as my favorite EVO cover proclaimed. A search for truth.

Or at least a solid high. Perhaps it was the drugs, but a sense of the absurd in EVO’s design, comic pages and editorial slant kept the paper whackily aloof from the lockstep with which the other papers followed “The Movement” - the anti-war, feminist, gay activists then storming the barricades when not fighting amongst themselves. On a certain level, EVO’s avant-garde stance assumed that the culture wars had already been won — just roll a joint and ignore the bullshit — and imparted a giddy, Whitman-esque vision of what life could be like in Amerika without the “k.”

Bold, creative, funny, sexy, tough, crude, dreamy, with a touch of Lower East Side Yiddishkeit and a Zen confidence in the limitless possibilities of the human imagination, not to mention a kindness and generosity for a clueless young writer, EVO was not a bad place to make a name for oneself. Or to acquire one which remains a touchstone for me whenever I forget that no matter what, there is always the Other.