The news business used to be fairly simple. Draw people to your product and sell ads to the companies that wanted to reach them. In print and cable TV there were subscribers too, and that was the entire business.

Not any more. As the news industry has gone digital — because that’s where the users are — advertising has been transformed. What’s called “inventory” (pages available to advertise against) has exploded because it’s so easy to publish online. Prices for ads have fallen. Most of the revenue goes to Facebook and Google because they are better at targeting: finding people who are likely to be receptive.

In the wake of these changes, news producers have had to look for alternatives to subsidize the costs of gathering and publishing the news:

Asking the most loyal readers to pay a greater portion of the costs for news production has been one response to the revenue crisis. The most popular method is the “metered” approach. Users get a certain number of clicks free and after that they are asked to pay. The Financial Times, New York Times and Washington Post all have meters.

Here a news company uses its reputation — and the ability to advertise itself for free — to lure people to events for which it can charge a fee. The Atlantic has been successful with this approach. At the local level, Chattanooga Free Press is a leader.

In a sense every company is a media company now. But what do most of these companies know about nonfiction storytelling? Not as much as publishers do! Converting this advantage into revenue is the strategy behind “native advertising,” in which media companies leverage their strengths as known producers of quality content. Especially adept at it is Buzzfeed, which knows how to get its stuff widely shared online and sells this skill to advertisers. Many publishers are trying to create in-house ad studios to grab some of this business. The Hearst company is a leader.

Nonprofit newsrooms like ProPublica, Texas Tribune and Voice of San Diego draw donor support by focusing on investigative and in-depth journalism that is clearly in the public interest.

This means appealing directly to users for financial support, usually on a project-by-project basis, as NPR’s Planet Money did with its series “tracing the creation of a T-shirt all the way from the cotton fields to the department store.” The Dutch site De Correspondent has signed up 40,000 paid members, which is crowdfunding on a more stable basis than Kickstarter campaigns can provide.

Other possibilities include micropayments for articles, e-commerce (selling things online), and subsidy by a related business, as Bloomberg and Reuters do by selling actionable information to traders and using the profits to support newsgathering for the public. 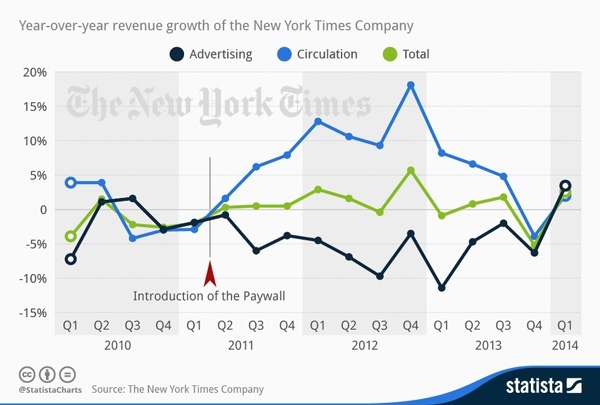 The New York Times is just one success story for the use of paywalls as a revenue stream. It shows loyal readers are willing to pay more for the cost of quality news production.

"TribFest" is now one of The Texas Tribune's main sources of revenue. It builds upon their reputation and audience, and since its launch, other revenue streams have increased. 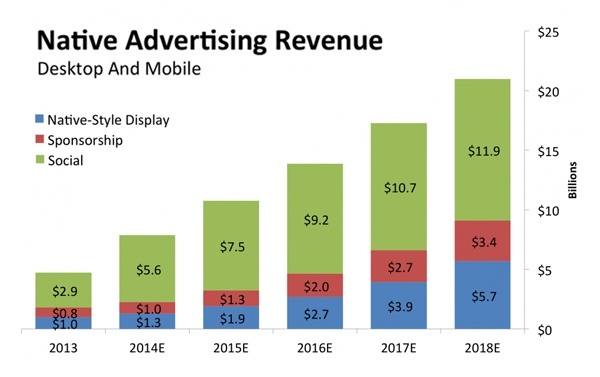 The old ways of sustaining quality journalism are breaking down. They cannot be relied upon. The search is on for new ways.

Also referred to as sponsored content, native advertising is an ad that’s disguised as another article or video. It fits the same tone and format as the rest of a media company’s content, all the while promoting a product or message.

Paywalls are gates that require readers to pay monthly or annual fees in order to access content. Several sites use a metered approach. Like a preview, this approach offers readers a few free articles before requiring payment.

Also referred to as subscriptions.

Unlike paywalls, micropayments ask for less money per article. This is comparable to buying single songs on iTunes, versus purchasing an entire album.

In terms of journalism, crowdfunding is a way to get projects, or even entire business off the ground. The readers all pitch in for you to tell the story.

E-commerce is the sale of a product online, it’s as simple as that. If the media company has a shopping cart of some sort, they use e-commerce to fund their news operations.

Eric earned a bachelor's degree in writing from the Savannah College of Art and Design in 2013. He has wondered what makes media tick ever since.