In its latest strategy memo, “Our Path Forward,” the New York Times mentions the term “product” a remarkable 18 times — equally as often as “journalism,” its core business. The Times says it wants to double its digital revenue to $800 million annually by 2020 and become mobile first. How? By focusing on products.

This is a relatively new term for the news industry. It always had products of course: the newspaper, the magazine, the broadcast. But these forms remained relatively stable over decades. To launch a new one was an expensive and difficult undertaking. In the tech industry, by contrast, “shipping” new products is normal business. Silicon Valley companies are constantly testing and iterating on their products. The rise of product thinking in news is directly related to the imperative to get better at technology, and to find way of delighting and satisfying users who have many choices for how to “spend” their attention minutes.

At the simplest level, the product is the built thing that people actually interact with, including the front-end technology, the editorial content, any ads or commercial material that users encounter, plus the design, which creates the user experience (UX, for short.) For as Steve Jobs said about design: “It’s not just what it looks like and feels like. Design is how it works.”

It used to be that the editors would come up with the story and an idea for how to illustrate it. They would then assign the photo or graphics department to execute it. Designers and IT were seen as a support function, not as equals. The “business side” sold the ads.

Today building a great editorial product is a joint effort. Everyone has to understand the business model and how new products fit into it. Developers and designers have to get involved much earlier in the process. As Alisha Ramos, front-end designer at Vox Media, puts it: “An ‘integrated newsroom’ is one in which reporters, designers, developers (and more) work closely, regularly, and happily together to develop features, apps, visuals, and tools.”

In newsrooms where product thinking has become normal, this kind of cultural integration is well along. That is not the way news business had organized itself prior to the internet. Nic Newman, former head of product development at the BBC, describes the pattern:

Many editorial and creative companies have found it hard to see technology as a legitimate driver of their businesses and have struggled to make the organizational and cultural changes required to deliver successful product. All too often the interface with editorial, user experience, marketing and sales remains something of a battlefield – with no-one taking end to end responsibility for the success of failure of the product.

That cannot go on, or the news business will be overwhelmed by the technology industry and become merely a supplier. The shift from creating content to making great editorial products requires fundamental organizational and cultural changes and a joint effort from different parts of the operation. It is no longer about editorial and technology side by side, but about interdisciplinary teamwork and creative collaboration — with users (and data) at the center.

A product manager in a news company — a new role — has to bring tech, business and editorial together to create something that people want, and then figure out how to keep improving it based on feedback that users and the marketplace are constantly giving.

Here’s my single, most important tip for building a truly integrated newsroom: Talk to one another. And maybe become BFFs.

As more digital readers gravitate toward quality, both in content and experience, we believe that offering the world's most journalistically and digitally sophisticated news products will continue to provide us with a unique advantage.

News doesn't stop, apparently. No matter what, a product has to ship. 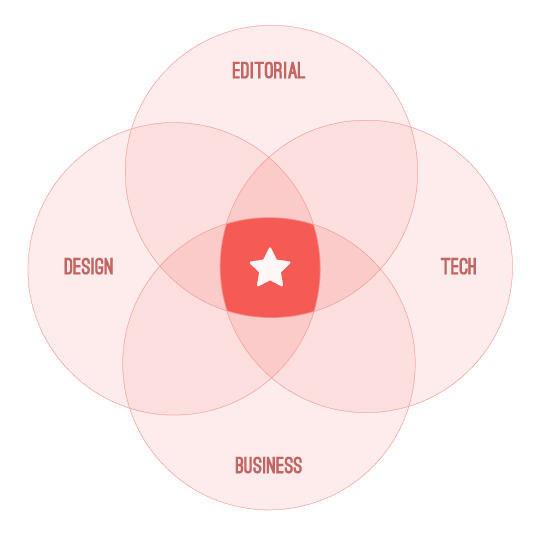 The product team works at the interface of editorial, tech, business and design.

Tech companies excel at building great products that meet users' needs. If news companies can't master that same discipline they will fall behind.

Kim is excited to explore new ways to help journalism thrive in the digital reality of today and tomorrow. Before joining Studio 20 at NYU she worked as a business and finance correspondent for German language media in New York.