In 2014 Anjali Mullany, digital editor of Fast Company, told the authors of the Post Industrial Journalism report: “If your content management system restricts you, it’s going to restrict everything you produce.” She went on to explain that in many newsrooms the CMS and human workflows are in constant conflict.

That same year political journalist Ezra Klein said that part of what led him to leave the Washington Post and start a new site for Vox Media was the superior content management system at Vox, now known as Chorus. The same thing had happened in 2011 when a team from Engadget, owned by AOL, left to create The Verge for Vox. The New York Times called it “a moment when young talent began demanding superior technology as the key to producing superior journalism.”

But it’s not just the CMS that matters. Lately there has been a shift in focus from the publishing systems themselves — which restrict what you can do, even as they make some things easier — to a broader set of challenges:

The key decision for management is whether to build a custom CMS from scratch that supports one newsroom’s workflow, or take advantage of open source systems — primarily WordPress or Drupal — and adapt them to the specific needs of the newsroom. The common consensus is that a newsroom’s CMS should be flexible and modularized and if it can achieve that without starting from scratch that is the better option.

Early content management systems were built around the assumptions of a write, edit, publish workflow, and many still focus around that process as a primary functionality. Publishing, however, has changed drastically over the last few years, and continues to change constantly. Storytelling for the web is a vast field, and, while many newsrooms have taken advantage of this through data visualizations, interactive stories, and powerful multimedia long form pieces, much of this experimental journalism is built outside of the CMS by journalists who can also code. Reporters without these technical skills are often pigeonholed into the types of storytelling allowed for by the CMS. The opportunity and challenge here for journalism is to ensure that everyone in the newsroom can produce innovative stories because they are supported by their tools.

Key challenges in this:

If your CMS restricts you, it’s going to restrict everything about the newsroom. The technology you’re using is going to change what you produce.

It’s almost impossible to overstate the importance of the CMS when it comes to the question of who’s going to win the online-publishing wars. 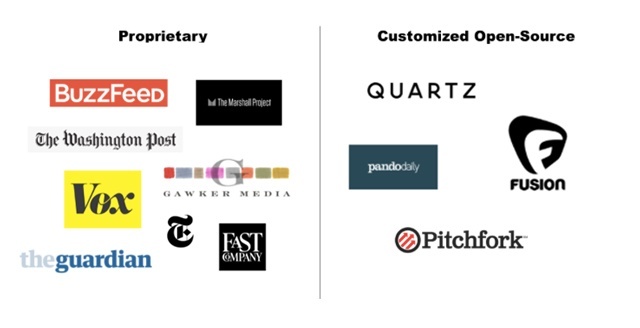 Newsrooms are primarily taking two approaches to CMS technology: building a proprietary system or customizing an open source one.

A set of protocols and code that lets programs share data and functionality without revealing the code behind them.

A web application framework written in the Python programming language. Its goal is to make development of data-driven websites easy, but importantly for this discussion it provides a variety of packages that let users combine it with CMSes to solve problems.

A software design technique where the functionalities of a program are broken into independent modules that each run one aspect of the system. The modules are then bought together into one piece of software.

A web application framework written in the Ruby programming language. It provides default structures for a database, a web service, and web pages.

These are the most widely used open source CMS technologies for all websites, including news. They allow for easy organizing, managing and publishing of content in a variety of customizable formats.

Eva recently completed her undergraduate degrees in Communications and Computer Science, and is interested in the innovations that occur at the intersection of journalism and technology.