The way people are getting information is shifting. More and more, the demand for news is being satisfied through tablets and especially smart phones. We call these devices “mobile,” but what that really means is that a small computer connected to the internet is always there, always on. Continuous connection changes people’s behavior, what they can do in the moment, which in turn forces the news business to change.

This a global trend. The Reuters Institute Digital News Report for 2015 includes 12 countries. It shows that use of smartphones to get news has been growing steadily since 2012. In all countries researched, 25 percent said smartphones are the primary device through which to get news, up five percent since last year. In the U.S time spent with mobile phones should surpass the time spent with desktops and laptops this year. The Pew Research Center’s 2015 State of the Media report states: “While desktop visits are still valuable to publishers – especially when it comes to time spent on the site – the number of mobile visits now outpaces desktop visits for the majority of the top 50 sites and associated apps.”

The change is especially dramatic among young people. They tend to come upon news through their social feeds rather than seeking it out by visiting a destination site. Through their devices, they read, comment, like, share and — sometimes — collaborate with journalists to create a conversation around what is happening.

The exploding popularity of podcasts, the rise of push notification for news, the dominance of messaging apps (and the rush by news companies to have products for them), the use of Facebook as a handy operating system for the rest of the internet — all are part of this larger shift to mobile. Some implications for news:

For legacy media companies, the shift to the desktop environment was in some ways easy. A web page at least resembled the page of a magazine. Mobile is a deeper and more disruptive shift. The relationship with the user changes, becoming more intimate, more continuous — and more demanding at the same time.

Consumers have an intimate and personal relationship with their devices which are often highly customized with apps, skins and settings of their choosing.

Mobile advertising requires a completely different approach to anything that’s come before it. It’s not just a new channel, it’s really a completely new format of spatially and contextually driven communications — a new marketing language. It’s not well suited to shot-gunning for attention or awareness. It’s about serving relevant information to consumers based on where they are and what they’re doing.

But the iPhone and the rise of smartphones that followed it repackaged the Internet into apps. The open web became just another app, living alongside all the others. Of every hour an average American spends on his or her smartphone, only about 7 minutes are spent in the web browser.

Mobile is a new medium, not just a smaller screen size. 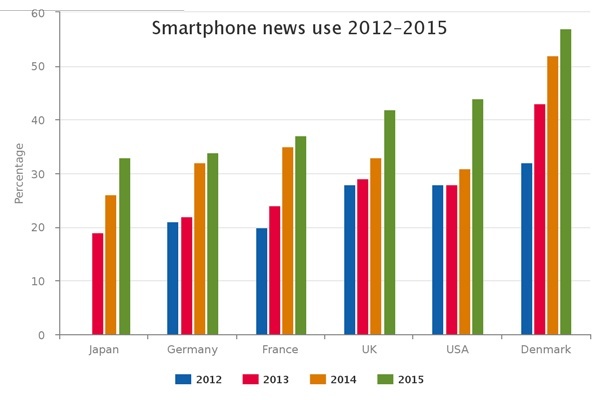 Reuters Institute for the Study of Journalism

According to the 2015 Reuters Institute Digital News Report, news accessed from mobile phones has jumped significantly — especially in the United States and United Kingdom.

Adults spend most time on mobile

One reason that might explain why people are getting more news on smartphones is that they are spending more time on mobile overall. According to this KPCB research, users now spend more time looking at smartphones screens than any other device.

Ad companies are aware of the increasing amount of time spent on smartphones and are investing more in mobile advertising.

Smartphones are changing the way people access the news. If the user experience is poor, the journalism doesn't have a chance.