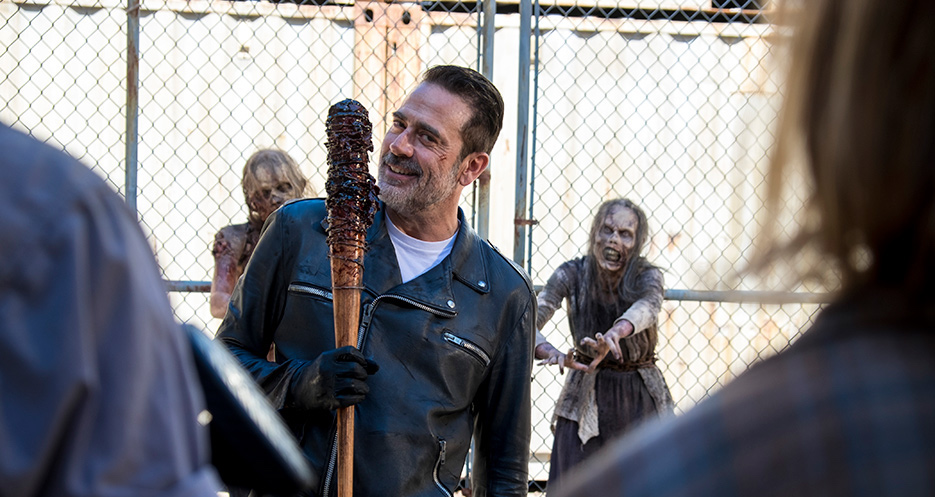 Watching society go to hell in a handbasket at the gnashing teeth of zombies is inexplicably entertaining, as demonstrated by the countless movies, television shows, comics and video games depicting such apocalypses. Though the exact situations in these stories may vary—from people battling zombies in sweltering Georgia swamps to dodging them in theme parks to falling in love with zombies—time after time, survivors continue to clothe themselves in leather.

Take Wichita’s and Tallahassee’s edgy, leather-laden looks in the film Zombieland, for example, or the bad-boy villain Negan in The Walking Dead who is rarely seen without his iconic leather jacket.

Negan’s nemesis on TWD, Rick Grimes, on the other hand, almost never wears leather. Instead, he whacks zombies wearing a denim jacket garnished with a trendy shearling collar. It turns out Grimes has the right idea—denim would probably be better protection than leather at the end of the world.

“There’s no one material that’s universally better than the others—it depends on the environment,” says Lucy Dunne, a materials scientist who studies functional clothing at the University of Minnesota. “Functional clothing is about balancing trade-offs. You’re always going to have drawbacks to a possible solution, like impeding mobility or providing enough insulation.”

Denim is made of cotton and woven in a pattern called twill. Twill’s structure tends to be very abrasion-resistant, especially when the weave contains heavier yarns. That makes for good protection against zombie bites.

“It’s a really strong weave,” Dunne says. “Levi used to make tents from denim in the wild west. They tried to sell gear to gold rushers, but people ended up needing trousers more than tents.” That’s how the brand became a denim icon.

Dunne says denim is also very comfortable (as many of us well know) and can be broken in to conform to one’s body. It’s also pretty “breathable,” meaning it absorbs water—or sweat—very easily and then lets it evaporate shortly after. Some body heat also leaves with evaporating water, resulting in a cooling effect.

There are definitely drawbacks, however—that flux of water and body heat makes denim a great breeding ground for bacteria. So whether it’s zombie-causing pathogens, bugs that lead to Staph infections, or a very inconvenient norovirus, Rick Grimes’ jacket might be harboring more than he knows. It also probably stinks, since so many bacteria thrive there. Synthetic, sweat-wicking fibers like polyester have a similar problem, which is why you can’t get the smell out of your gym clothes.The bacteria that cause B.O. just don’t want to leave.

The wool, or shearling, lining Grimes’ jacket also has some issues. It’s definitely adds durability, but when wool absorbs water, it really likes to hold onto it. You don’t get the cooling effect that denim and other cotton clothes have. “It’s also really heavy when it’s wet,” Dunne says. “If you fall into water and try to swim, you’re going to have some issues.”

Leather, on the other hand, holds much less water than denim or wool and allows you be a bit more mobile right off the bat since it’s easier to break in. That’s partially because it doesn’t even have woven fibers to work with—it’s literally just skin (which is a bit macabre, yet somehow grotesquely appropriate for a zombie apocalypse). That lack of sturdy woven structure means leather wears out more quickly and is more easily pierced and torn.

“Since leather is skin, it has a lot of the same properties: strong, resilient, the ability to take on a lot of different shapes,” says Dunne. “But it’s not as durable as other materials. It’s more susceptible to abrasion.”

At the end of the world, your clothes need to survive a lot of wear and tear and zombie bites. That means people who wear leather in the zombie apocalypse—which is a lot of people—should probably be wearing denim instead.

But no matter what you’re wearing, your clothes’ fit could end up being your downfall. A saggy pair of pants or an ill-fitting jacket could impede mobility and dexterity and get caught on debris—from tree branches to grasping zombie hands—as one navigates the end of the world. Knowing how to sew and alter clothes could be just as essential to surviving a zombie apocalypse as wielding a shotgun.

“Clothing is one of the basic human things we’ve done for millennia, and sewing is something we’ve been doing since we’ve been wearing clothes,” Dunne says. “There’s something to be said for having basic knowledge and a physics understanding of what we’re wearing. In an apocalypse, your tailor is the most important person to bring with you.”